A One Man Folk Industry

Review of “The Road to Peterloo” in The Living Tradition Magazine

One could argue that it’s taken this year’s bicentenary of the actual event (the massacre by troops of a peaceful crowd of protesters in a Manchester field) to enable its fullest, most accurate representation; and both Mike Leigh’s recent film and the musical history project enshrined on this CD and its companion live concert show can undoubtedly be considered crucial to this (along with the publication last year of Dr. Alison Morgan’s book, Songs & Ballads Of Peterloo).

This is a musical chronicle that by eschewing the modes and trappings of folk-opera or recreated drama provides an even more convincing account of the event, one that (importantly) explores both its context and timeline. The three participants make a fine team; they’re already individually renowned for their keen research and musical expertise and proficiency, skills which enable them to utilise authentic lyrics, actuality accounts (predominantly in the form of contemporary broadsides) which are carefully matched to existing tunes or in a few cases supplied with fully credible and idiomatic new ones.

The CD adopts a sensibly chronological approach. Its first eight songs serve to set the scene and examine the root causes of disaffection and the rationale for protest – this sequence contains items familiar from the wider folk repertoire, which are here reappraised and brilliantly reinvigorated to emerge entirely fresh. An instrumental interlude precedes three eye-witness accounts of the massacre itself. The final sequence begins with the backlash (a pair of biting satirical commentaries), then moves on to the aftermath, the continuation of protest with the subsequent rise of Chartism.

The Road To Peterloo may be viewed as something of a benchmark in its musical portrayal of a key historical event in due perspective, in that it has spirit, is genuinely alive and not dry or dusty, and raises our awareness of the issues by bringing the essential narrative to life through its use of authentic sources and its commendably direct, unfussy presentation (good honest musicianship and vital, committed performances, and abundantly informative accompanying booklet). Congratulations!

Interview with Pete Coe in the Living Tradition 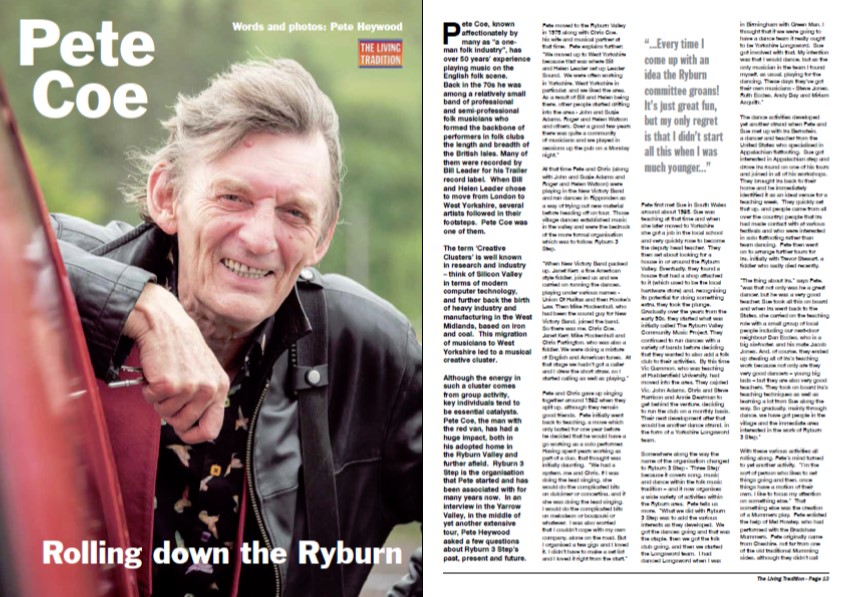 “It may be easier and quicker to list the talents that Pete Coe doesn’t have.”
Andy Kershaw, BBC World
“Pete Coe in many ways represents the backbone of the modern folk revival. A fine solo performer and an energetic activist for the scene as well, founding Ryburn 3 Step, running folk clubs, dances and workshops in Ripponden and beyond while also teaching music and dancing in schools. He’s still one of the most committed, most versatile, most important folk artists in Britain.”
Colin Irwin MOJO
“Every aspiring young performer needs to watch this man whose driving, footstomping delivery on a variety of instruments and outstanding voice is an object lesson in regard-for-your-audience basics.”
Paul Davenport, English Dance & Song magazine
“He’s an impressive singer, songwriter, and a multi-instrumentalist who switches from bouzouki to melodeon, banjo, dulcimer and “feet” (he’s a good, percussive dancer), and can handle anything from traditional ballads to comic material.”
Robin Denselow, The Guardian

Reviews of CD “The Man in the Red Van” BASH CD63

“Between these lines runs a quiet sense of humour and detachment only the best can handle. It goes without saying now, Pete Coe is one of the best.”
Nick Burbridge, R2 Magazine (Read the full review – R2 review)
“As he has done for many years now, he accompanies himself expertly with effortless banjo, bouzouki, the late and great Tony Rose’s guitar, Hohner melodeons, and foot percussion. Accompaniments it’s a joy to listen to. A master performer. It’s the latest CD from a really superb English folk singer and musician.”
Jerry Simon, Stirrings. (Read the full review – Stirrings review)
“After more than four decades in the business, Pete now delivers another superb album that’s right up there with the very best….” “This CD triumphantly conveys the essence of Pete as consummate performer and interpreter….”
David Kidman, fRoots
“There’s a very good reason why Pete Coe’s career has been such a long and successful one: this is a man who never rests on his laurels and who is constantly looking for new angles from which to approach his music. In addition he’s an extremely competent singer, musician, arranger, step dancer and a stage performer of rare ability…”
John Waltham, Living Tradition Full Review on Living Tradition site
“A new Pete Coe album is always a delight… considered, emotive performances of carefully selected material expertly played and recorded. This is no exception…..”
Nigel Schofield, Tykes News
“Pete’s love of traditional song is clearly evident in this magnificent set of songs and ballads from England, Ireland and Canada, as well as a couple of Pete Coe originals…..”
Barry Goodman – Shire Folk
Pete Coe is one of the old guard, one of the last. He’s been in this business for more than forty-five years and still has all the moves….” “Musically the album is deceptively simple. Pete plays most of the music with sparing support from Andy Peacock and producer David Crickmore plus a chorus of colleagues and friends. He doesn’t need any more than that.”
Dai Jeffries – Folking.com
(full review)
“Pete’s talents as a multi-instrumentalist are what really tie these songs together nicely….”
Richard Catton – English Dance and Song 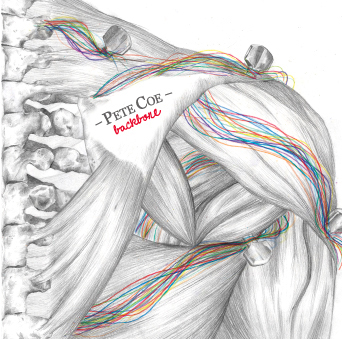 “Pete Coe may never have received the same recognition as many of his veteran contemporaries, or the new generation of folk heroes, but he has played a major role in the British folk club scene ever since he became a professional musician back in the early 70s. And as this set proves, he deserves a wider audience. He’s an impressive singer, songwriter, and a multi-instrumentalist………”
Review of “Backbone” by Robin Denselow in the Guardian)
“This outstanding album ably demonstrates that not only is his strength undiminished, his hunger for exploring the music and presenting it in new and interesting ways is as keen as ever.”
fROOTS
“Pete Coe’s formidable contribution across four decades remains largely unsung. It’s a pernicious oversight, as this boldly forthright collection proves.”
MOJO
“Though familiar, each song is rejuvenated by Pete’s approach – and he even allows himself a little rewriting and always to the song’s advantages. He treats songs and tunes as trusted friends and they return the compliment. Each Pete Coe release over four decades has been a rewarding discovery and, more importantly, a welcome place to return to many a time and often.”
Tykes News
“What marks this one out as probably his best solo album is the great attention to detail, recording quality, programming, design and so on, and he is in remarkably good voice throughout.”
EDS
“This is an exceptional record, coegently demonstrating that Pete is as much a backbone of the modern folk revival as this fine disc should itself by rights form a backbone of your own CD collection.”
LIVING TRADITION

“One of our most versatile and impressive performers”
Alan Bearman, Towersey Festival
“Positively ebullient on stage, step-dancing whilst playing and singing.”
Lawrence Heath, fROOTS
“Nowhere do you find all the threads of song, dance, musician, caller & organiser woven together in such a rich tapestry.”
David Herron, The Living Tradition
“Pete Coe is dry of wit, strong of voice and his instrumental versatility is of vaudevillian impressiveness.”
The Glasgow Herald
“Uniquely gifted as a terrific singer, accomplished multi-instrumentalist and thrilling step-dancer, sometimes all at once! An evening with Pete Coe is an exhilarating experience.”
Electric Theatre, Guildford
“The headliner was Pete Coe, from the UK, a tall, lanky “one-man Folk Show” with a predominantly traditional repertoire, a huge and wonderful voice, and a multi-instrumentalist and master of his craft. Add to all that his ability to dance in the clogging style whilst playing, he was a knock-out, and left his audiences gob-smacked.”
Auckland Festival New Zealand review
“A prolific performer with ability beyond bounds.”
Chippenham Folk Festival
“An industry? More a multi-national.”
Dave Tuxford, City Life, Manchester

The Road to Peterloo